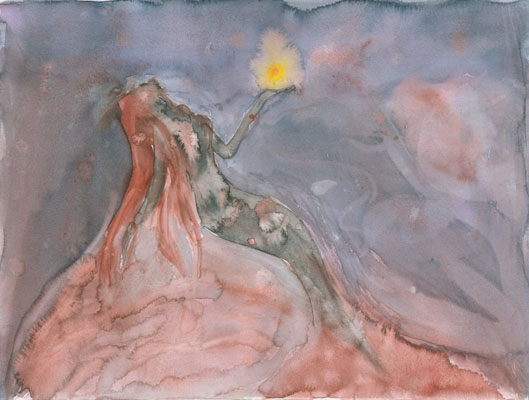 In a completely non-metaphorical way.

I’ve been doing a lot of decluttering the past few years, wave after wave of getting rid of the things that don’t really help me anymore (or never did). I’ve culled through my books (a little), my toys (a lot), my collectibles and tools and even my art. I made a pile of stuff I just didn’t like, wasn’t happy with, or wasn’t sure anyone else would ever like.

The art was all works on paper, prints and watercolors that didn’t quite do it for me. I’ve been recycling them into Etsy packaging for larger sales, for the most part, though so far I haven’t actually destroyed anything I didn’t really dislike. In fact, I’ve even rescued a few pieces from the pile over the time it’s been there, and one of them was this Mermaid.

If you look at the page there, you can see how it’s marked “sold.” In fact, it sold the same day I posted it, and I’ve had several compliments on it aside from that.

I got $400 for a piece of art I nearly shredded into ribbons or turned into an origami box.

What’s the moral of this story? Well, first off, that everyone is their own worst critic. And even if you think you know what people want, maybe you just know what you think you’d want.

It cost me nothing but a little time and effort to scan the piece and post it as a daily art post, something I needed pieces to fill up anyway (I’ve still got a big pile of finished work, but eventually I will run out, which has motivated me to start working on some new stuff). That, and the storage space for it and the other pile of maybe-art I’ve got sitting on a tray on top of my refrigerator at the moment.

I know that I “declutter” my ideas list just as often as I do my house, abandoning things that seem half-baked, or don’t quite fit my idea of what’s awesome. The problem, of course, is that I’m not actually my target audience — I only have so much wall space, and a lot of it is covered by bookshelves. A lot. So now I’ve been making an effort to doodle more, to post little sketches and see what resonates with my audience before I totally ditch an idea.

What are you getting ready to toss that someone else might love?

« Doing It Right Takes Less Effort | Cartoons and Monsters and Weddings and Art: An Update »
2 Comments

Sorry, the comment form is closed at this time.

“Amy is easy to reach by phone or email and able to make our changes almost instantaneously so our site is up-to-date and fresh.

“She designed a site our members find easy to move around in and find what they are looking for.

“Going with a monthly contract instead of paying hourly has allowed us the freedom to make changes, create forms and use her creative talents without worrying about every penny.”